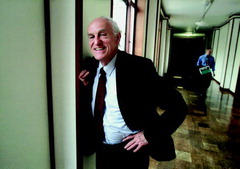 I came up to Cambridge in 1945 to read Classics at Clare College, later switching to Psychology. My first job arose within the Department so that after completing my degree I became a research worker in the Nuffield Research Unit into Problems of Ageing. The Director of the Unit was A.T. Welford, who also acted as my PhD Supervisor. In pursuit of my dissertation on 'The Employment of Older Workers in Industry' I visited 100 companies and became fascinated by the many facets of industry. Following the completion of my thesis I married Eunice Fellows, who herself had just completed her own PhD and after attending a course at the Institute of Engineering Production in Birmingham, I was offered a Research Fellowship at Cranfield (then the College of Aeronautics). Lecturing in the Work Study School (the forerunner of the Management Department brought me into contact with a wide range of executives, one of whom offered me a short consulting assignment when my research grant ran out. “With your qualifications and this experience you should then be able get a proper job”. I never did. Instead I combined research and consulting work and later lecturing, engaging in many assignments in the UK and overseas. In particular, I advised large companies on the selection and placement of new graduates and on the selection of candidates for engineering scholarships and sponsorships. Eunice's career had progressed well and in due course we set up the Industrial Training Research Unit at Cambridge with Eunice as Director and myself as part-time Chairman. During this time, I set up on behalf of OECD public sector training projects in the USA, Sweden, Austria and the UK and was able to oversee the long-running experimental study of management teams at Henley Management College. My consulting work took me into Europe on behalf of the Commission of the EEC to advise how the best candidates could be selected from different countries. Eventually, when the Manpower Services Commission went into decline, I continued studying the most cost-effective ways of creating new jobs within a new body, the Employment Development Unit, with the financial assistance of local authorities. Later we set up the family partnership of Belbin Associates with its central focus on the development and marketing of computer-based advice in the field of Human Resources. The system, called Interplace, currently operates worldwide in nine languages. In terms of voluntary activities I became the first lay member in Cambridgeshire of the Lord Chancellor's Advisory Panel on the Appointment of Magistrates, on which I served for ten years. My other activities include being Senior Associate of the Institute of Management Studies in Cambridge and Visiting Professor in Leadership at Exeter University. As an author I have written the widely-read Management Teams: Why They Succeed Or Fail (1981), The Job Promoters (1990), Team Roles At Work (1993), The Coming Shape Of Organization (1996), Changing The Way We Work (1997) and Beyond the Team (2000). My latest book, Managing without Power, has just been published. Written by: Meredith Belbin