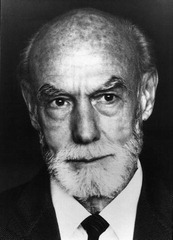 Roger W. Sperry was born in Hartford, Connecticut, USA in 1913. He first studied English literature at Oberlin College, from which he graduated in 1935. After his first degree, he remained at Oberlin College but switched to the study of experimental psychology. This combination of degrees and the supervision of R.H. Stetson developed something of the polymath in Sperry. It encouraged him to think in terms of the bigger picture, relating biology, psychology and philosophy. He was a seeker after integration between disciplines. Sperry's first published paper in 1939, on the subject of the co-ordination between nerves and muscles, was also an appeal for an integrative perspective on the study of behaviour.
Sperry's doctoral research in Chicago was on developmental neurobiology and conducted under the supervision of the eminent neurobiologist Paul A. Weiss. Sperry looked at the development of neuron-muscle connections and the possibility for plasticity that were present in the developing animal.
Between 1941 and 1946, Sperry worked in the laboratory of Karl Lashley. This was first in Harvard and later Florida. Sperry pioneered techniques for looking at the neural development of the visual system in newts and was able to gain insight into broad fundamental issues of neural development. By defining the role of genetics and environment, Sperry was to earn a lasting name in biological psychology. His work was a step towards the demolition of naïve nature versus nurture debates and the building of an integrative science of biological psychology.
In 1946, Sperry took up an appointment as Assistant Professor of Anatomy in Chicago. Here he did research on the nature of visual perception and the role of the visual cortex.
A PhD student of Sperry, named Ronald Myers, did research on the role of the corpus callosum, the bundle of neuron processes that project from one hemisphere to the other. The role of this structure was then enigmatic, no-one being sure what this pathway did and Sperry wanted to find the answer. In a paper published in 1953 and based on non-human subjects, Sperry and Myers were able to offer a start at explanation in terms of the transfer of information between hemispheres and the deficiency caused by cutting this pathway. From this, the expression 'split-brain' derived, a term that is so closely associated with the name of Sperry.
In 1954 Sperry moved to California, to take up an appointment as Professor of Psychobiology at the California institute of Technology ('Caltech') at Pasadena. Sperry's continuing research on split-brain animals showed that cats and monkeys were able to perform independent learning in the two hemispheres.
In 1960, a surgeon working in Los Angleles, Joseph Bogen, described to Sperry one of his patients who was suffering from severe epilepsy. It was suggested to Sperry that the patient might be helped by surgically cutting the corpus callosum. Bogen had worked at Caltech and was familiar with Sperry's methods. This instigated a program of research investigating the effects of the treatment in humans.
In 1965, Sperry produced the first of a series of papers on philosophical speculation concerning the nature of mind and its relation to the brain. For his work, Sperry was awarded the Nobel prize. Sperry died in 1994 in Pasadena, California.