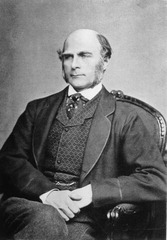 ir Francis Galton (1822-1911) was a British scientist who developed a controversial, and today discredited, method for measuring human intelligence. Galton argued that measuring people’s physical attributes, such as eyesight, strength of grip, hearing, etc., was a valid way of assessing their intelligence. In 1884, Galton created a mental testing laboratory in the South Kensington Museum in London (today’s Science Museum), where he charged visitors for the privilege of having their intelligence tested in his ‘anthropometric laboratory’ – a laboratory for ‘measuring humans’. Galton also introduced the idea of normal distribution, and was one of the founders of the eugenics movement. Galton was the cousin of Charles Darwin and was highly influential upon the work of Lewis Terman.