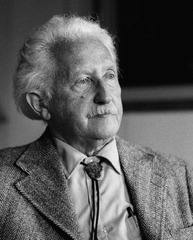 Erikson (1902-1994) was an American psychoanalyst who made major contributions to the field of psychology with his work on child development and on the 'identity crisis'. Born in Frankfurt, Germany to Danish parents, who were not married and separated before he was born, he was raised by his Jewish mother and Jewish German stepfather. He was brought up as Erik Homburger – the name of his stepfather. It is possible that some of his later interest in identity came from his feelings of puzzlement at being raised by two dark haired Jewish parents when he himself was blond and blue-eyed. In his youth, Erikson renounced Judaism, although his family members were observant Jews and he got on well with his mother. Erikson hated formal schooling and did not do well. Indeed, he never got a degree and failed the onl y university course in psychology he ever took (in the 1930s at Harvard). Erikson's adolescence can be said to have been turbulent. Later, he came to conceptualise adolescence itself as necessarily a time of 'crisis'. Erikson kept a journal in which he speculated about spiritual, psychological and philosophical questions that he would eventually write about. He spent seven years travelling through Europe trying to establish himself as an artist and later acknowledged that he had been deeply neurotic (and close to psychosis) in his adolescence. Throughout his life, he wanted to know who his birth father might have been and he spent a long time in unsuccessful searching. In 1927 Erikson met Freud's daughter, the Austrian psychoanalyst Anna Freud, in Vienna. He was recommended by his lifelong friend Peter Blos (who also developed theories of identity) and b y Dorothy Burlingham for a post teaching in a small school for the children of those in Freud's circle even though he had no qualifications. He was a frequent visitor to Freud's house and was psychoanalysed daily by Anna Freud for six years. With her encouragement he began studying at the Vienna Psychoanalytic Institute, where he specialised in child psychoanalysis and was elected a full member of the Vienna Psychoanalytic Society (and, hence, the International Psychoanalytical Association). At this time, he considered himself a clinical artist, gifted in clinical insight. In 1933 he left A ustria because of the Nazi threat and went to the United States, where he became interested in the influence of culture and society on child development. He was a pioneering child analyst in Boston. He made up the Danish and Christian (rather than Jewish) name Erik Erikson after becoming a US citizen in 1939. In the US, Erikson was influenced by eminent psychologists and anthropologists and developed his interests in history. He participated in a longitudinal study of child development at the University of California at Berkeley and helped with wartime projects such as analysing Hitler's speeches and German propaganda as well as the psychological aspects of living on a submarine. His work as a consultant advising on the psychiatric treatment of war veterans influenced his later theorising on identity, as did his anthropological interest in Native Americans; his observations of both children and adults (particularly those who were troubled) and his visits abroad, for example to India. In 1960, he was appointed Professor of Human Development and Lecturer in Psychiatry at Harvard University. He had four children, but was a distant father. His fourth child had Down's syndrome and was institutionalised for the 22 years he lived. Erikson always said that he had three children and he and his wife did not return from a visit to Italy for this son's funeral (Gardner, 1999). Erikson's interest, experience and research are evident in his numerous publications and in the theories he developed. For example, he was always keen to relate what happened to individuals to what happened in society at the particular point of history in which they lived. He can be said to have developed a discipline of psychohistory. His studies of Native American children led him to relate personality growth to parental and societal values. His first book, Childhood and Society (1950), became a classic in the field. As he continued his clinical work with young people and drew on insights from his work with war veterans, Erikson developed the concept of the 'identity crisis'. This he saw as an inevitable conflict that accompanies the growth of a sense of identity in late adolescence – discussed in Identity, Youth and Crisis (1968). Among his other books are Young Man Luther (1958), Gandhi's Truth (1969) and Insight and Responsibility (1964). His later (and not well-known work) arose from his observations of the dehumanising effects of the Cold War and his fears of the threat of nuclear war and belief in the power of the individual when his/her personal vision fits with the current historical forces. He died aged 91 years in 1994.