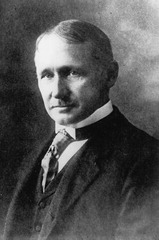 Frederick Taylor (1856-1915) was a US engineer who is famous as the developer of a system of industrial engineering known as 'Scientific Management,' which was tremendously influential in his own time, and the basic principles of which continued to exert an influence over organisational management for a long time subsequently.
Born into a middle-class Quaker family in Philadelphia, Taylor became an apprentice machinist and patternmaker at the Enterprise hydraulic works in 1875. Three years later, he went to work for the Midvale Steel Company as a machine operator, but worked his way through a wide range of jobs there, including gang boss, foreman, head of the drawing office and finally Chief Engineer. While working at Midvale, Taylor took evening classes and gained a degree in Mechanical Engineering in 1883.
A few years before gaining his degree, he began his 'time studies' in the Midvale plant. He was motivated by a desire to increase efficiency, as measured in terms of increased output by the workers and his method was to observe closely the individual worker, analysing and timing each movement or action needed to complete a task. He would then formulate this into a standard way of doing any given task and the workers would be trained to perform the task in the prescribed way, and no other. Taylor believed that this system was truly scientific as it was based on observation and it attempted to discover the 'best' way of doing any job, ruling out human variability and error and increasing efficiency. Previously, the best way of doing a job had been determined by trial and error and individual practice but Taylor believed that by using scientific management techniques, increasing specialisation and the division of labour, the production processes would become more efficient.
Taylor's model of the worker was basically a machine one. The individual worker was seen as a cog in the wheel of the wider organisation and his incentive to work more efficiently would be increased pay in the form of bonuses. Once a 'fair' level of performance for a task had been established using the principles outlined above, the pay system would provide a greater reward for work outputs above this level. Taylor did not see himself as treating the workers badly in introducing his system because he assumed that money was the only real motivator for them at work and that by providing a 'fair day's pay for a fair day's work', their need would be satisfied. He saw himself as a reformer of an inefficient system.
Taylor's interest in Scientific Management eventually led him to leave the Midvale Company and set himself up as a consulting engineer in management, in which capacity he served a number of prominent US firms, including the Bethlehem Steel Corporation. He retired at the age of 45 and devoted his time to promoting his system through lectures at universities and professional organisations. His books Shop Management (1903) and The Principles of Scientific Management (1911), were both extremely influential .
In subsequent years, there was criticism of Taylor's system. Although the system did indeed produce increased output and greater efficiency initially, it resulted in monotonous and repetitive work for the individuals within such a system and did not take into account any motivational factors at work other than money; neglecting the social and psychological elements of work. Accordingly, it came under attack from a range of groups, including the early British industrial psychologists, of whom C.S. Myers was perhaps the most vociferous.