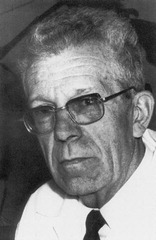 Asperger was born in Vienna in 1906 and trained in medicine and paediatrics. He developed an interest in working with 'difficult' children, using an approach known as 'remedial pedagogy' developed at the University Paediatric Clinic in Vienna. He was influenced by the systematic psychiatry recently developed by Eugen Bleuler.
It seems that among the children referred to his clinic, there were a substantial number who these days would receive a diagnosis of an autistic spectrum disorder. Based on his research and therapeutic work with these children, Asperger published a doctoral thesis entitled 'Autistic Psychopathy in Children' (1944). Asperger made the claim that the condition he described was a significant and separable syndrome affecting children, but possibly persisting into adulthood. (Asperger later conducted follow-up studies which confirmed this view). The major focus of Asperger's interest was in less severely affected or 'high functioning' children. These children had been referred to the clinic for what nowadays would be referred to as behavioural problems such as uncontrollable or anti-social behaviour at home or at school.
With colleagues at the Vienna clinic, Asperger developed a specialised programme of treatment and education for the children. While the treatment included a medical dimension, the main focus was on a structured programme of education. On the research side, Asperger carried out detailed individual case studies, including some invaluable studies spanning more than 30 years. The main emphasis in these studies was on individuals who are socially eccentric, difficult or aloof, but in intellectual terms, averagely or even exceptionally able. While highly respected in Austria, it was only in the 1970's that Asperger's work was brought to a much wider audience, partly through the interest of the British child psychiatrist, Lorna Wing. It is through Asperger's pioneering work that psychologists and psychiatrists now agree on a distinctive sub-type of autism known as Asperger's syndrome.
Asperger adhered, throughout his work, to the idea that certain children were biologically pre-disposed to autism, and that it ran in families - both views which are widely accepted in current work.
Some have suggested that Asperger was himself mildly autistic. He was a quite, reserved man who arguably shared some of the traits he described. He certainly identified closely with the children he worked with and stressed the positive value of the 'autistic' view of the world, again prefiguring current traits. Asperger was made Professor of Paediatrics in Vienna after the war.