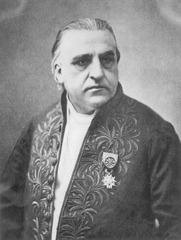 Jean-Martin Charcot, who died in 1893, was a doctor working in a large Parisian hospital. He was responsible for the systematic classification of many disorders of the nervous system, including multiple sclerosis and Parkinson's disease. He is thus recognised as 'the father of neurology'. His influence on psychology, however, comes mainly from another phase of his work. Charcot also classified types of hysteria; that is, states thought to stem from the conversion of psychological symptoms to physical ones. He investigated these states using hypnosis, and argued that during hypnosis symptoms very like hysteria (for example, the temporary paralysis of a limb) could be induced by suggestion. The empirical basis of Charcot's work on hypnotism has been questioned. However, the work did open up the possibility that human beings are strongly affected by psychological forces beyond their conscious understanding. This was a strong influence on Freud, who visited Charcot's clinic.
Charcot's son was a great Antarctic explorer, who named the desolate Charcot's land after his father.