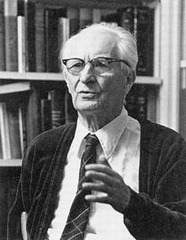 Heider was born in Vienna in 1896. After completing his PhD on the role of environmental factors on the perception of different objects, Heider began studies at the Psychological Institute in Berlin where his tutors included Kohler, Wertheimer and Lewin. During the 1930s he moved to the United States where he remained for the rest of his career.
From an early age, Heider was preoccupied with ideas about relations between people, which were intensified during the years of World War I. Years later this preoccupation manifested itself in his book, The Psychology of Interpersonal Relations (1958).
Heider also had a deep interest in geography and maps, wanting to find out how parts of a region lay in relation to each other. Transferring this analogy to Psychology, he wanted to understand relations between ideas and concepts and to place the results of experimental papers that he read on what he thought of as the map of psychology. Later contact with Kurt Lewin and the philosopher Cassirer, with their emphasis on the importance of theory, strengthened the approach that his fascination with maps had already brought to his psychological thinking. Later came a struggle to find systematic concepts that could be used to deal with the everyday events of life. Work by Max Wertheimer and the Ethics of Spinoza also influenced Heider. His book, with its ideas on attribution, has influenced a large number of researchers in the area of attribution and led to a substantial body of both experimental and theoretical work.
Heider was based at the University of Kansas for most of his career. He died in 1988.