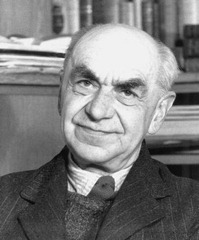 Sir Frederick C. Bartlett (1886-1969) obtained a first class honours degree in Philosophy in 1909 and a masters degree in Sociology and Ethics in 1911 at London University. He then went to Cambridge and in 1914 gained a first class honours in the Logic section of the Moral Sciences Tripos. In the same year, he became Assistant Director of the Cambridge psychological laboratory, taking over as Director in 1922. He was appointed as the first professor of experimental psychology at Cambridge in 1931, was awarded a CBE in 1941, a knighthood in 1948 and a Royal Medal by the Royal Society in 1952. He was awarded many honorary degrees and gained widespread international recognition.
During the period between 1914-1939, his research considered perception and memory. Bartlett was discontented with the associationist theories of perception, learning, memory and thinking that prevailed at the time, and the use of meaningless nonsense material to study memory by Hermann Ebbinghaus. Instead, he wanted to study perception and memory as they occur in real life. From the beginning of the Second World War until his retirement he researched human capacities and limitations in relation to skill and skill acquisition. Both before and after his retirement, Bartlett also studied thinking, publishing a book in Thinking: An Experimental and Social Study (1958). His best-known book is, however, Remembering: A Study in Experimental and Social Psychology (1932), where he links cognitive functions to biological ideas and social behaviour, revealing the influences of James Ward and his close friend W.H.R. Rivers.
After retiring, Barlett retained a room at the Applied Psychology Unit (APU) in Cambridge, established by the Medical Research Council in 1944, and Alan Baddeley remembers Bartlett as “a tall distinguished grandfather figure known affectionately as 'Sir Fred', who would occasionally attend tea or coffee, and from time to time would bring visitors around” (Baddeley and Gregory, 2000, p.36). Bartlett had taken over as Director of the APU after the death of its first director, Kenneth Craik, and following Bartlett, his students Norman Mackworth and later Donald Broadbent directed the Unit. Both basic and applied research was conducted in the Unit and this reflected Bartlett's understanding that they blended together, and that by applying psychological principles, theory would be enriched and practice assisted. Alan Baddeley, a later Director of the APU, wrote “I resisted any temptation to change what could have been regarded as a slightly old-fashioned title, which probably failed to reflect the amount of theoretical work that was done at the Unit, because I too believe in the importance of blending pure and applied research.” (Baddeley and Gregory, 2000, p.37).