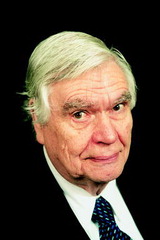 Richard L. Gregory is Emeritus Professor of Neuropsychology at the University of Bristol. Following a university lecturership at Cambridge designing and running the Special Senses Laboratory, he moved to Edinburgh in 1967 to set up the Department of Machine Intelligence and Perception, with Donald Michie and Christopher Longuet-Higgins. He moved to Bristol in 1970 to direct the Brain and Perception Laboratory in the Medical School.
His main work has been developing a general account of visual perception, with emphasis on a variety of phenomena, including various 'illusions', for suggesting and testing theories of brain mechanisms and cognitive processes. He was awarded the Hughlings Jackson Medal of the Royal Society of Medicine for neurological research.
Founder of the exploratory hands-on Science Centre in Bristol, Gregory was awarded the Royal Society Faraday Medal for work on the public understanding of science. Has eight Honorary Doctorates and is Honorary Fellow of Corpus Christi and Downing Colleges, Cambridge. He is a CBE and Fellow of the Royal Society. His publications include Eye and Brain, The Intelligent Eye, Mind in Science, The Oxford Companion to the Mind, Mirrors in Mind, and is founder-editor of the international journal Perception