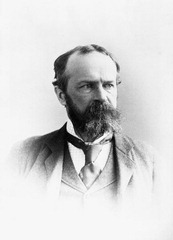 William James was born in New York on January 11, 1842 and was the oldest of five children (his brother Henry, the second born, also achieved fame, as a novelist). The James' children had an unusual upbringing in that their father used his independent income to allow him to devote time to his children and to take them travelling around Europe. James also attended private schools in the United States and Europe, Harvard University, and the Harvard University Medical School. He received a medical degree in 1869 - this was a period before psychology degrees were available. James was often acutely depressed and was ill for three years before becoming an instructor at Harvard in physiology in 1872 (when he was 30) and in psychology in 1875. His illness allowed him time to rest and seek treatment in Europe as well as to experience clinical psychological states of which he later wrote. It also allowed him time to become extremely well read, in literature in French, English and German. James' marriage in 1878 seems to have helped his health and focussed him on teaching and writing in anatomy, philosophy, physiology and psychology. It was a time when academics were more frequently polymaths (people who have much and varied learning) than can be the case now with the expansion of academic disciplines. He retired when he was 65 (in 1907) and then gave successful lectures at Columbia University and the University of Oxford. James died in Chocorua, New Hampshire, USA on August 26, 1910.

In the year that he married James also began work on his first book that would be published 12 years later. This was the Principles of Psychology (1890). It was written in a very engaging style and established him as one of the most influential thinkers of his time. James wanted psychology to be seen as a natural science that focussed on experimental physiology and biology, rather than being centred only on introspectionism which had dominated philosophical psychology since the writings of John Locke and David Hume. Principles of Psychology advanced the idea of functionalism in psychology (which stressed that mind and behaviour should be analysed by studying their functions or utility rather than their content). Although James never worked in a laboratory himself, he helped to establish psychology as a laboratory science based on the experimental method (described in chapter 1 and to be discussed again in many of the chapters which follow). James was also strongly influenced by Darwin's ideas on evolution (which will be discussed in the next chapter). In Principles of Psychology James discusses his ideas about identity. However, he also made contributions to other areas, including the study of memory, child development, emotion and perception as well as emphasising that experience is the source of knowledge. Principles of Psychology was 1400 pages long and in 1892 James revised it into the 'Briefer version' which has been more widely read. After this, he concentrated mainly on his philosophical work.
James also applied his empirical methods of investigation to philosophical and religious issues such as the existence of God, the immortality of the soul, free will, and ethical values. He is also well known for his later philosophical work Pragmatism: A New Name for Old Ways of Thinking (1907). This was based on the work of the American logician C. S. Peirce and suggested that the value and significance of ideas is not determined by their origins, but by their possible consequences. If ideas have no consequences, they are meaningless. James argued that the method used by scientists to define their terms and to test their hypotheses was meaningful, because they made predictions (by developing hypotheses). According to James's pragmatism, truth is that which works. Hypotheses can be considered true if the predicted events take place.
By the end of his life (at 68 years), James had become world-famous as a philosopher and psychologist who was noted for his open-mindedness to new ideas, including psychoanalysis and who had expanded the content of what was considered to be consciousness