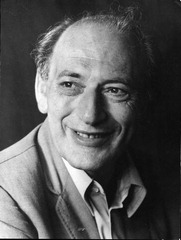 Henri Tajfel (1919-1982) was born in Wloclawek, Poland just after the First World War. His father was a businessman. He attended secondary school in Wloclawek, but then left Poland at the age of 18 because Jews could not receive university education in Poland at that time. He went to France and got his baccalaureat in Paris before studying Chemistry at Toulouse University and the Sorbonne between 1937 and 1939. He found that he was not interested in Chemistry and devoted himself to becoming bilingual and enjoying Parisian life. He remained keen on Paris throughout his life.
In 1939, before he could finish his degree, the Second World War began and Tajfel was called up to serve in the French army in November 1939. A year later, he was taken prisoner by the German army and was a prisoner in various prisoner-of-war camps in Germany and Austria from 1940 until the end of the war in 1945. Throughout that time he had to pretend that he was a French Jew, rather than a Polish Jew, for which he would have been killed immediately.
He used the experience of living under a false identity in terror of discovery to inform his later work, which developed into Social Identity Theory. John Turner (1996) says:
'The point he made was that no matter what his personal characteristics were or the quality of his personal relationships with the German guards, once his true identity had been discovered, it was that social category membership (of being Polish) which would have determined the reaction of the guards and his ultimate fate. His personal attributes and identity as a unique individual would have proved unimportant and irrelevant to their response.'
In 1945, after War, Tajfel was released and discovered that his parents, his brother, various other relatives and indeed most people he knew had been killed – 'his social and cultural background had been wiped out' (Turner, 1996). He became a French citizen and for the next six years worked for organisations which tried 'with insufficient means to stem the flood of misery' (Tajfel, 1981). In these he organised training and education as part of the rehabilitation of refugees from several countries. It was this work that led to his interest in psychology. Tajfel studied part-time in Paris and Brussels between 1946 and 1949, gaining a Certificate in General Psychology and a Diploma in Educational Science.
His marriage to Anna Eber, a German-born woman whose family had settled in London, led to his move to Britain, where his two sons were born. From 1951 to 1954 he studied for a degree in psychology at Birkbeck College, University of London, first part-time, then full-time after he won a very rare Ministry of Education scholarship for mature students for 1953-54. He gained a first class degree then worked as a research assistant in Durham University and, in 1956, moved to Oxford University, where he stayed as a lecturer in social psychology for 11 years. He did his PhD part-time at Birkbeck College. In 1957 he acquired British citizenship and published his first academic paper.
He moved to Bristol in 1967 (a year in which he had a major heart attack) to become the first professor of Social Psychology at Bristol University. He retired from Bristol in 1982 and moved back to Oxford, but died a few weeks later on May 3rd 1982, aged 62 years.
Tajfel's theories and research have had undoubtedly far-reaching influence. John Turner (1996) says of him:
'Tajfel was not the first to grasp the significance of categorization for social psychology… but he has certainly provided the clearest and most influential analysis of its relationship to perceptual accentuation phenomena, and more than anyone else is responsible for the increase in its explanatory significance in contemporary social psychology.'
His work was characterised by a commitment to European psychology and his own recognition that his research and theories were all bound up with the deeply significant and traumatic events of the Holocaust. For this reason, he was committed to developing a genuinely social psychology.
From the early 1960s and for the rest of his life, Tajfel played a leading role in the development of European social psychology. He was the second President of the European Association of Experimental Social Psychology (from 1969-72). He was also the editor of the European Social Psychology Monographs and a member of the editorial board of the European Journal of Social Psychology, both of which were founded in 1971, during his term as president of the EASP. His commitment to these projects were because he believed that in order to understand human social life, it was crucial to include all human social experience from many cultures.
A great many now eminent British social psychologists did PhDs in Bristol and were influenced by Tajfel. These include Michael Billig; Rupert Brown; Susan Condor; Michael Hogg; Penelope Oakes; Steve Reicher; John Turner and Margaret Wetherell. Tajfel stimulated research in cognitive, experimental social psychology, including the topics of: social perceptions; social categorisation; Social Identity Theory; intragroup and intergroup processes and speech accommodation theory.